This article is a stub. You can help Musaigen no Phantom World Wiki by expanding it.

Shosuke Morohashi (諸橋 翔介 , Morohashi Shōsuke?) is a student at Hosea Academy and a friend of Haruhiko Ichijo. He is a supporting character in the Musaigen no Phantom World series.

Shosuke is a tall young man with short, slightly spiky dirty blonde hair, pulled back by a black hair-band, and he has amber-colored eyes. Shosuke is usually seen with a normal Hosea Academy uniform for boys.

Shosuke is a kind guy who cares for his friends, and he also seems to have a laid-back personality. Altough from time to time, he shows his perverted side, as seen in Episode 14.

Shosuke and Haruhiko are close friends, they call each other by their first names, without any honorifics. They are seen to be sitting at lunch together several times, and they talk about various topics with each other, showing how close their friendship really is. However, Shosuke seems to be slightly jealous of Haruhiko, due to his team consisting entirely of girls and the large harem he gathered nearing the end of the series.

Sakura and Shosuke are close, and in volume 2 of the light novel, Shosuke develops feelings for her, and as the world was coming to an end due to the various phantoms causing problems. Realizing he had no other chance, he decides to confess. She returns his feelings and as it goes, Haruihiko and his team were able to save the world for the time being, they now are a happy couple. 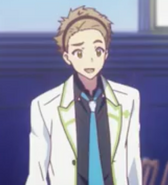 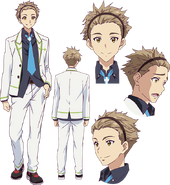 Add a photo to this gallery

Retrieved from "https://musaigen-no-phantom-world.fandom.com/wiki/Shosuke_Morohashi?oldid=7491"
Community content is available under CC-BY-SA unless otherwise noted.