This article is a stub. You can help Musaigen no Phantom World Wiki by expanding it.

Toko Kashima (華島 冬湖, Kashima Tōko?) is the Mew of ability users, she has every ability, and she has a deep relationship to Haruhiko's past. She is the main antagonist of the Musaigen no Phantom World series.

Toko was the first human with phantom abilities, so she was taken in as a baby by Alayashiki for experimentation. She eventually becomes the head of Alayashiki and it was Toko who released Rupa and created ART in the first place.

Toko appears in Volume 2 as a girl with many abilities and Haruhiko's childhood friend.

After meeting Haruhiko, she becomes extremely attracted to him and can even be considered a yandere. She has said to him that she loves him to death, want to dance with his corpse and so on. However, Haruhiko consideres Toko an enemy after some events.

Since Toko is the Mew of ability users, she has every ability from Telepathy and even Phantom Eater. 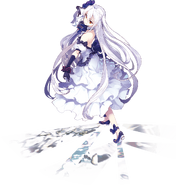 Add a photo to this gallery

Retrieved from "https://musaigen-no-phantom-world.fandom.com/wiki/Toko_Kashima?oldid=7074"
Community content is available under CC-BY-SA unless otherwise noted.